Welcome our Nova Scotia holidays destination page. A maritime paradise home to craggy coastlines, scenic lighthouses, laid-back adventure, Celtic history and some of the world’s freshest seafood. It will fill up your lungs with fresh sea air and stir your heart with nautical adventures.

Your Nova Scotia adventure holiday will likely begin in the laid-back capital of Halifax, which is only six hours from the UK. The city harbour is undoubtedly the most recognisable image of Halifax but beyond the boardwalk, you’ll find live music, freshly-caught seafood, craft breweries, and Pier 21 – also known as Canada’s National Immigration Museum.

But of course, there’s more to Nova Scotia than just Halifax. Just 30 minutes away you’ll find Peggy’s Cove, where you’ll stumble upon Peggy’s Point Lighthouse aka the most photographed lighthouse in Canada. There’s also the nearby Lunenburg, which dates back to the 18th Century and was the first British settlement in the province outside of Halifax.

After exploring Halifax and its nearby towns, it’s time to hop in your rental car or Motorhome and explore Nova Scotia’s picturesque 13,300km coastline. Top of the list has to be the Bay of Fundy, where you’ll find the highest tide in the world. Animal lovers should keep their eyes peeled for seals, porpoises, seabirds and at least 12 different species of whales.

And when it’s time to eat, you’ll be treated to seafood that was caught just that day in the surrounding waters. Keep an eye out for lobster, the famous Digby scallops, or the mussels from Mahone Bay. Remember to complement it with a glass of local Nova Scotia wine from one of the 16 wineries in the province.

Finally, at the northern end of Nova Scotia, you’ll find Cape Breton Island. Its highlight is the Cape Breton Trail, which will take you on a scenic drive along the striking coastline, flowing mountains, secluded beaches, and charming coastal towns.

When you’re finished exploring Nova Scotia, you’ll be in an enviable position to visit one of Atlantic Canada’s other provinces. You can reach Prince Edward Island via ferry from Caribou, while you can reach New Brunswick via ferry or toll bridge. Newfoundland & Labrador can be reached via ferry from North Sydney. 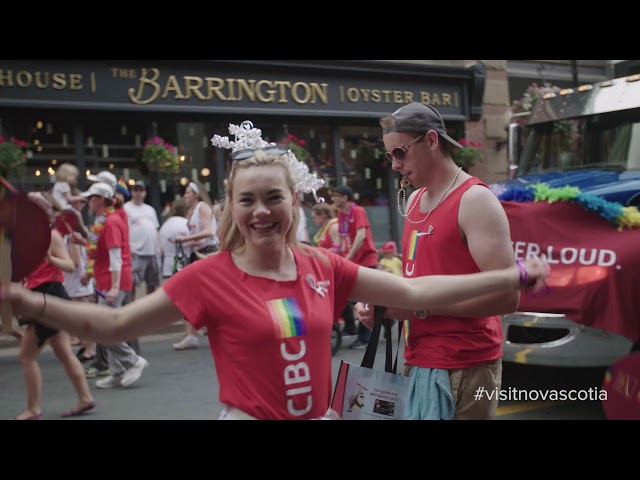 All staff are Canada Specialists

Over 40 years of experience selling Canada

Our bespoke holidays are tailor-made to suit your personal requirements

For our peace of mind, ALL holidays are ABTA and ATOL protected.

Places to visit in Nova Scotia

Just six hours from the UK, Halifax is where almost everyone starts their Nova Scotia adventure. During the day you can explore one of its museums (the Maritime Museum is home to the biggest collection of Titanic artefacts in the world), cycling along the waterfront, and tuck into some fresh seafood. Then at night, you can tap your toes to the live music in the Downtown Halifax pubs.

Located a 4-hour drive from Halifax, your journey to Nova Scotia would be incomplete without experiencing the breathtaking Cabot Trail. This route is considered one of the world’s most scenic destinations, and the steep hills will make you feel like you are plunging into the ocean. On your drive, you will stop to see lush ancient forests, giant cliff-faces and glaciers, panoramic ocean vistas and the mysterious Cape Breton highlights. Do this journey in late Spring and you might be lucky enough to see icebergs floating alongside you.

When you step foot in Peggy's Cove, you'll immediately recognise it. While Nova Scotia might be home to 160 historic lighthouses, none are as photographed as Peggy’s Point Lighthouse. Surrounding the lighthouse are rocks smoothed by the fresh ocean waves, wooden fishing houses, and scenic hiking trails.

A UNESCO World Heritage Site, Lunenburg is located 1 hour away from Halifax and enchants visitors with its charming streets and unique architecture. Take some time to explore the picturesque waterfront before visiting the Bluenose II, Nova Scotia’s sailing ambassador and a replica of the schooner who raced undefeated for 17 years. Featured on Canada’s currency and passport, this is a landmark not to be missed.

Situated along the north-west coast of Nova Scotia with Prince Edward Island just across the water, the Bay of Fundy is home to the highest tide in the world. Adventurous types can sign themselves up for tidal boarding where you'll be flung about in the tidal bore waves. The Shubenacadie River in Nova Scotia meets the Bay of Fundy, where the water suddenly starts flowing in a different direction. It's one of the few places in the world where this happens.

Food and drink in Nova Scotia

You'll find seafood restaurants dotted around Nova Scotia where the food was literally caught just 10 metres away that day! You can even book a lobster catching tour where you'll return to the shore and boil your own lobster to dine on against the sunset! And remember to try the Chowder.

It's not only wine-fiends that are well-catered to in Nova Scotia. The local collection of micro and craft breweries feature everything from India pale ales, lagers, pilsners and stouts. You'll also find North America’s first single malt whisky at Glenora Distillery and a maple vodka (!!) made with local maple syrup at Steinhart Distillery.

Nova Scotia takes pride in its farm-to-table ethics and there's no better place to see this first hand than at one of the 40+ Farmers Markets across the province. Halifax, New Glasgow, Dartmouth, and Lunenberg all have Famer's Markets that are open year-round.

Another way to discover just how fresh Nova Scotian cuisine is, is a day with The Kilted Chef! Spend your day with chef Alain Bossé as you source out the freshest ingredients at local markets, and then enjoy a personalised cooking class at his house. Your meal will also be complemented with some fresh Nova Scotian wine.

Delve into the culinary history of Nova Scotia with this 18th-century dinner party. hosted by actors, these dinner parties are based on the historical tradition of holding a secret banquet for the poor. You'll find this culinary adventure at Point of View Suites in Louisbourg.

Things to do in Nova Scotia

Nova Scotia boasts five UNESCO designated sites, several are so close together you can explore them all in a few days. These are:

Embark on a hike

Nova Scotia is home to seaside trails, backcountry hikes and leisurely strolls - covering a variety of terrain for all experience levels. The Skyline Trail on Cape Breton Island is the most popular and provides an eagle’s eye view of the Cabot Trail, overlooking the Gulf of St. Lawrence.

Experience whales in their natural habitat as well as other Atlantic marine wildlife including seals, dolphins and sea birds. Whale watching boat tours are found throughout Nova Scotia, but the best whale-watching opportunities are found along Cape Breton’s world-famous Cabot Trail and alongside Nova Scotia's Bay of Fundy.

Soak yourself with some watersports

Nova Scotia is surrounded by water and, naturally, the locals take advantage of this. Rafting, kayaking, and surfing are all popular pastimes. You can also visit the Bay of Fundy and engage in some Tidal Bore Rafting, where you'll be flung over some of the highest waves in the world.

Gaze at the stars

Part of Southwest Nova Scotia has been designated as the first Starlight Tourism Destination in North America by the UNESCO-affiliated International Starlight Federation. Here you can witness the night sky as it's meant to be seen: pure, clear of smog, and sparkling with stars!

See how beautiful Nova Scotia is for yourself... 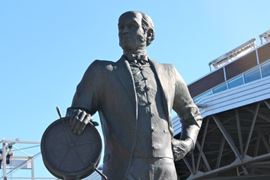 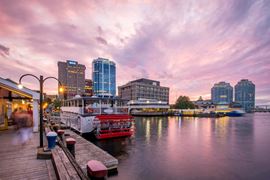 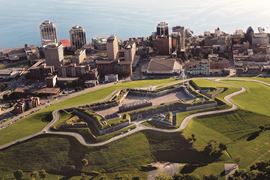 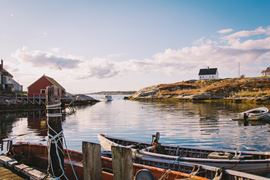 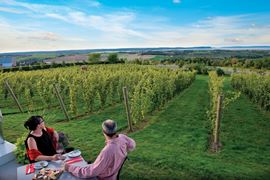 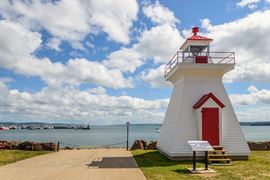 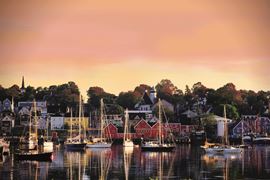 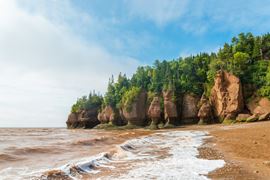 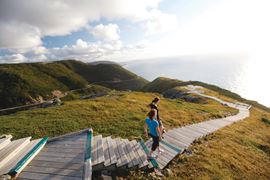 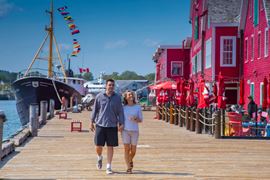 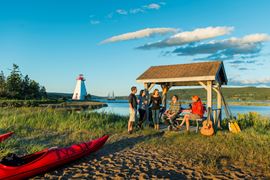 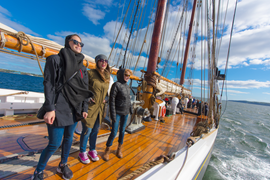 Combine your Nova Scotia holiday with...

Welcome to Canada's easternmost province: the first place in Canada to be touched by the sun's grace and where the locals are exploring while the rest of Canada is still tucked up in bed. And when you see how beautiful Newfoundland and Labrador is you'll understand why it's popular with a striking selection of wildlife and people who like the slower pace of life.

Located in eastern Canada, New Brunswick is known for its natural beauty. Sharing borders with Quebec to the north and Nova Scotia to the south, its rugged Atlantic coastline is dotted with sandstone cliffs and sandy beaches, with picturesque lighthouses and plenty of natural wonders to keep the whole family entertained.